exporting jobs instead of food 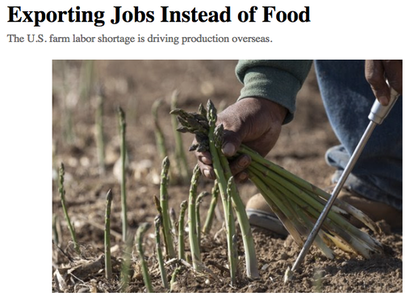 ​House Republicans are brawling over immigration again, and it could scuttle their farm bill. Most of the public debate focuses on the so-called Dreamers. But another big problem receiving less media attention is that the immigration restrictionists are detached from the reality of the American farm economy and a worker shortage that’s driving food production overseas.

The farm labor shortage is growing more serious as the overall U.S. jobless rate falls. The Labor Department says about half of the 1.2 million or so workers employed in agriculture are undocumented, and if they were deported the shortage would become a crisis. According to the Pew Research Center, more Mexicans left the U.S. than came between 2009 and 2014. Many farm workers who arrived decades ago are aging, while others have moved to higher-paying jobs like construction.
Mission Produce president Steve Barnard, who started growing avocados in California in 1983, tells us that the contractor he uses to recruit workers cut his labor supply by 50% this year. Many employers have boosted wages. Some California farmers report paying more than $20 per hour plus perks like 401(k)s and profit-sharing bonuses. Mr. Barnard’s workers can earn up to $400 per day.

This is how a labor market works, and the higher costs are fine for producers of high-value crops. But farmers who grow lower-value crops like lettuce, tomatoes and oranges can’t pay as much and some can’t find enough workers at any wage. While some farm work is being mechanized, most produce is still hand-picked.
An increasing number of farmers are thus turning to H-2A visas for guest workers. Visa certifications have doubled to about 200,000 over the last four years. But procuring guest workers under current rules is laborious and expensive. Farmers have to prove they tried to hire native workers. Delays are common since the same division of the Labor Department that processes H-2A applications also certifies seasonal H-2B visas. The bureaucrats are known for nit-picking, which can prolong hiring. Farmers in the Santa Barbara region last year reported losing $13 million of produce because workers didn’t arrive in time.
Farmers also have to provide housing for their workers. This is particularly onerous in California due to restrictive zoning laws, notably coastal areas where avocados and citrus are grown. This is one reason Mr. Barnard says he now produces about 92% of his avocados overseas.

As farmers struggle to find workers, more production has moved abroad. Avocado imports have doubled over the last eight years while U.S. production (measured by acreage) has declined by about a quarter. Since 1999, domestic production has fallen for oranges (by 36%), grapefruits (61%) and asparagus (69%). Imports of fresh fruit and vegetables have swelled. Imports of fresh oranges since 2009 have nearly doubled and tripled for mangoes. This hurts workers in related industries like transportation and food processing. Each U.S. farm worker supports two to three American jobs.

Free-trade agreements aren’t the culprit. U.S. production of many fruits and vegetables increased after the North American Free Trade Agreement was ratified. The decline in production and increase in imports also preceded trade pacts with Peru (2009) and Colombia (2012).

All of which should make fixing the H-2A program a priority for Congress, and success could help Republicans hold at least a couple of House seats in California in November. But restrictionists are pushing a Potemkin H-2A reform linked to an e-Verify mandate for all employers, and e-Verify isn’t a reliable authentication system.

House Judiciary Chairman Bob Goodlatte is whipping votes for a bill that would limit farm worker visas to 410,000 annually, which would include the existing immigrant workforce. This isn’t nearly enough. Worse, falsely documented workers would be required to come out of the shadows and return to their home countries before they can be readmitted. This won’t happen because many have families in the U.S. and worry about being barred from re-entry. Mr. Goodlatte defended his bill on these pages this week, but he doesn’t have the votes because he’d make the farm-labor problem worse. If the restrictionists want their priority of more border or internal security, they need to do more to keep farm jobs and production in America.