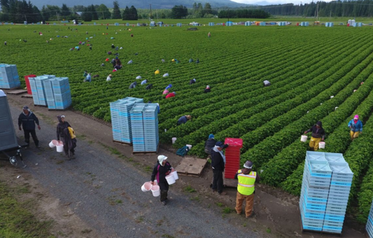 The big story of the Washington Department of Labor & Industry's finding about the Sumas berry farm is that they were not responsible for the death of the worker and there were no workplace safety or health violations. But there is another important story not to be missed.

The Department fined the farm, according to the farm's statement published below, $73,000 for improper work breaks and food. A Whatcom Court can add an additional 105% to that fine. There are two very important points to make.

1. Laws provide high levels of worker protection.
These farmworkers are highly protected by probably the most stringent worker protection laws in the nation or world. If anyone can find more stringent worker protection rules, we beg you to show us. In the meantime, the union activist groups like Columbia Legal Services say that these workers are the most unprotected. In the case of the Sumas farm, the steep fines imposed were not because breaks or food was missed, but that they were later than the law requires. These laws are strict, rigid and those not fully and 100% complying face extremely stiff penalties as this action by L&I demonstrates.

Those who call the guest worker program "slave labor" such Community2Community's director and the Southern Poverty Law Center has, need to confront the fact that the law requires these mandatory (and timely) breaks and requires that the farmer provide low cost food (an adequate amount and quality and obviously it must be served on time).

2. Farmers have a difficult time complying – not because they don't want to, but because they must force many of the workers to comply.
That may seem strange but it is true and for very good reason. These breaks cut into the amount of money these hardworking men and women can make. They are typically paid on an incentive basis – per pound picked or with production bonuses. While each and everyone of them makes considerably more than the state's high minimum wage (also required by law), almost all make much more than that. The state reports an average of over $18.00 per hour. But many farmers report paying many $25 per hour with the better workers making over $30 per hour and the very best, in the right conditions, earning considerably more. The right conditions is the key. The early pickings of berries or apples or other fruit usually means large fruit and lots of it. If you are paid on an incentive basis it means you "have to make hay while the sun shines." The sun is shining in those conditions. But while that saying may apply to farmers who don't take breaks that interfere with work, it doesn't apply to their employees. State law and federal guest worker law says the workers must take breaks whether they want to or not. It's a good law, because breaks are important. But it is hard convincing workers when they are making $30 per hour and more that they have to stop for a break, get out of the fields or orchards, and sit down and rest. It costs them money. Many do not go willingly. So farm supervisors have to go through long rows and fields to make certain that every employee is complying – or face serious consequences.

It's in that environment that the anti-worker activists operate. They may ask other workers, was there ever a time when you weren't forced into a taking a break when it was required? If a worker says, yes, then the farmer can be fined, like the $150,000 fine.

Farmers work very, very hard at complying and usually do a very good job. But when you see these activists and their friends talking about farmers not giving workers breaks, now you'll know what they have to deal with.